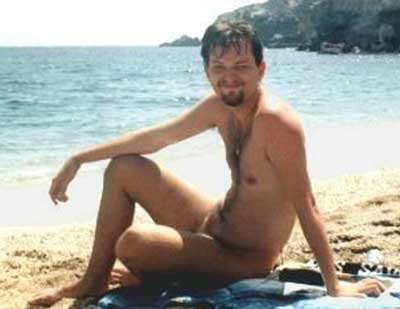 One good thing about being locked in my house, besides being naked all day, was having to find ways to entertain myself. There was no Facebook or PS3 or Cartoon Network in the 80’s, only He-Man and GI*Joe and Transformers, and when those were over, I turned to my own imagination, to writing fiction. My first characters were superhero knockoffs, like the Red Panther, but after discovering nudism, I had to wonder: if I was happier without underwear, why not He-Man? My first computer was a Commodore AMIGA 500, which had no hard drive, no modem and only five-hundred kilobytes (that’s KILO, not MEGA) of RAM. I used it for word processing and drawing naked men. Anyone seeing my artwork at the time would have just assumed I was gay, for despite sincere efforts, I simply could not draw women. My newest hero was the Greek demigod, Dynotus (a precursor to my current naked hero, Xandr), who, with the help of his lover, Chani (an early version of Thelana) went through four ring-binders of exotic lands fighting exotic monsters, all with genitals unsheathed. As a lonely, deeply repressed child, it was easy to project myself into this character free of inhibition and my mother’s OCD and the clothing I found so confining. Little could I imagine the real life adventures I would later embark upon.

I used to have the “whoops, I went to school and forgot my clothes” dream almost on a nightly basis, except for me, none of the teachers or students seemed to care. It happened so often I sometimes feel like my becoming a nudist was part of some Inception-like plot. In other dreams, I’d be lounging around the house, watching TV, when my sister would come home from work. She would see me, see that I was naked, and say “Hey, Nick” like nothing unusual was going on. Just to be clear, there was nothing incestuous about the dream, but the normalcy of nudity gave me a thrill. After all, I craved acceptance more than anything. But that could never happen, could it?

The summer following my sister’s honeymoon, she and her husband let me tag along on their tour of the Greek islands. This kind of trip was nothing new to me, except my parents weren’t around, and now I was harboring a secret naturist lifestyle. We took the ferry to Crete, the largest island in Greece, and from there visited Santorini, believed to have inspired Atlantis, with its volcanic black beach, sheer cliffs, and blue and white houses overlooking the Mediterranean. Far more beautiful than any landscape, however, was what I found on our third stop, on the island of Eos. We just unpacked our bags as the sun was setting, and I asked my sister if it was OK to run down to the beach. A ten minute stroll from our hotel, under an orange and red sky, and I could see the elegant lines of bare bodies on the sand.

The casual, shameless way these people went about the beach thrilled and inspired me, and I wanted so badly to join them, to cast off my clothes right then and there, but what would my sister say? How could I even begin to broach the subject? To be honest, I do not remember what I said, only that I somehow found the courage to “come out” to her. The great thing about my sister is that she’s a talker. Sometimes, when we’re on the phone, I can put the receiver down and go to the bathroom and not miss a thing. And when it comes to topic, no subject is taboo. But this was more than just talking. I told her how I’d wanted to visit a nude beach for years, not to see girls (as one might expect) but to be naked myself, before the entire beach going public. Her reaction? “Sure, why not.” What I didn’t know at the time, and what caught me entirely by surprise, was that her husband harbored the same interest.

The week that followed was utterly surreal. It was as if we’d stepped through a magic portal into my dreams, where bodily shame did not exist. I took to nudity like a born nudist, without any of the embarrassment I used to feel in third grade, as shameless as unicorn girl in the eyes of my sister and her husband, and every other tourist on the beach, many of whom lacked the bravado to drop their bathing suits. And the experience exceeded my expectations.

Now let me just take a moment to discuss swimwear. Remember my feelings for ties and church shoes? It does not compare to my loathing for bathing suits. I can’t imagine how stuffing a vagina into a bikini must feel, but whoever invented modern men’s swim trunks needs to be punched in the nuts. There are few worse sensations than walking around Adventure Island for eight straight hours with sopping wet genitals while the rest of your body is bone dry. These things hold water better than Pampers. I’ve forgotten swim trunks in my car for days only to discover they’re still wet! At the beach, sand gets sucked into your butt crack and in every crease and crevice of your testicles and pee hole. I avoid the beach just so I don’t have to wear the damn things. This was the only downside to my island experience. Regular beaches were ruined forever.

Every year I was determined to visit a nude beach, but there were many obstacles. Some islands cater solely to textiles and sometimes aunts and uncles went with us, but what was especially frustrating were the beaches known for nudism with no nudists! Even in Eos, I’d find nothing but timid tourists. It all seemed to change from month to month, since the time of year determined what nationality went on holiday. Greek and Italian tourists never go naked, for some reason, despite a long history of embracing the human form in sculpture, but Germans, Swedes and Norwegians often do. For reasons that continue to elude me, the greater the latitude, the more people seem willing to go au natural.

As the years went by, more people became complicit in my escapades. I traveled the islands with my other sister, her sons, and my best friend (and his friends) who lived in Athens, and was naked in front of them whenever possible: on the beach, in the hotel room, even in my parents’ summer home. Surprisingly, nobody seemed to mind, despite that they were too shy to try it themselves. Once, my nephew and I visited a remote beach on the island of Mykonos. There was no way back but by ferry, or so we were told, and we missed the last boat. We had to hike for miles through rugged hills and bush land. For him, it was an ordeal, but for me it was an adventure, a chance to live like Dynotus, like my ancient ancestors before things like bathing suits were invented.

By my late teens, I could travel the islands on my own, but naked people were like birds on the verge of extinction. Just pick up a copy of Summer Lovers, filmed in Santorini in the 80’s; everyone on the beach is naked. Even my best friend’s father told me that when he was my age, he was like “a Martian” in his bathing suit on the Greek islands. Not so today.

But like a determined ornithologist, I went in search of this rare nudist-bird, to the most remote and hidden places on the islands. Now imagine this: you spend hours trekking uphill and downhill, cutting through thorny bushes and olive trees and goat pens, in a buck-twenty weather, until finally, finally finding that beach some bartender told you about the night before, and guess what? There’s a bunch of fucking people there! And not just any people . . . families, with kids! Are they naked? No! Not even topless. I mean, what the hell, people, didn’t you see the beautiful sandy beach four feet from your front door?

I eventually became so frustrated looking for nudists, I said “screw it” and just went naked wherever and whenever I wanted. And that’s how I discovered something remarkable; lots of people want to go nude, but are afraid to do so. Like the unicorn girl that inspired me, I inspired others. I would plant the nudist colony flag and people would gather around me to ditch their bathing suits. Even if no naked people showed up, I was undeterred. I went from the only kid showering in his underwear to the only naked guy on the beach. Sometimes the tourists would take pictures of me, as if I was some cultural novelty (I didn’t mind) and I also met some girls from Norway, who joined me in a game of volleyball, never seeming to mind my dangly bits. In fact, as I was walking to my hotel, one of these girls was passing me on her Vespa, and reached out her hand to smack me on the butt. I was flattered.

There was only one problem. Back home in the U.S., I was alone. My friends and family tolerated my nudism, but couldn’t understand it, and the wait for summer was agonizing. Again, I became painfully aware of the paradox of nudism. In private, I was free, but with the people closest to me, with my mother and father and coworkers and classmates, I was not free.

One thought on “Least Likely to Become a Nudist: A Memoir: Part 4”