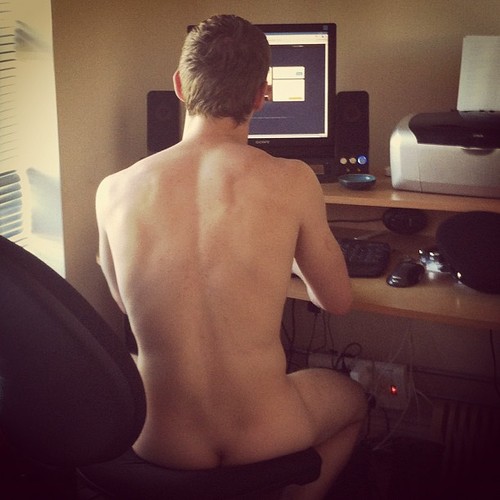 I would like to give a special thanks to Felicity Jones of Young Naturists America for originally posting this story on her blog!

People talk about Obsessive Compulsive Disorder these days as if it were a joke. “Oh, I am so OCD!” you might say, when choosing what to wear or putting away the dishes. Even in movies and TV shows, they make light of it; see As Good As It Gets with Jack Nicholson or the TV show Monk. But for my mother, OCD was no laughing matter. She suffered through it, rarely getting even a few hours sleep per night. In my family, we simply referred to it as “mom’s problem.” At least, that was what I called it before high school. My psychology textbook chapter on OCD was a revelation. “Oh my God!” I thought, “that’s mom!” Her neurosis affected every aspect of our lives. Among her many hangups was how I was supposed to dress and comb my hair, but she obsessed mostly over doors. Only she and my father were allowed to have keys. My sister, who lived with us until she was thirty, never had a key of her own, calling my mother every day to unlock the front door. This wouldn’t have been so bad if my mom had been a housewife, but we were restaurant people, and our lives revolved around making pizza. After the school bus dropped me off, my mother made me a quick lunch as I watched He-Man and the Masters of the Universe, and for four to six hours afterward, I became a solitary prisoner in my own home. Dad, brother, sister and mother were all at the restaurant, and every door in our house was locked from the inside. Thank God we never had a fire, or I would have been toasted alive. The downside to being trapped in my house was, of course, loneliness. I talked to myself incessantly and acted out the stories running rampant in my head. But after bathing unicorn girl, I discovered a surprising benefit to my solitary existence.

There was a certain excitement in showering without shame, which led me to spending naked time in the bedroom. And since my mother locked and unlocked and locked the door about fifty times before getting in her car, I knew when she away, and when I could be alone. Let me just say I’ve spent a lifetime trying to describe my initial feelings about stepping through my bedroom door sans underwear. Maybe it was the years of repression, the inhibitions impressed upon me by both my mother and Baptist school, but I felt like I’d lived my entire life in a cave and was now seeing a beautiful landscape, or that I was someone who’d never known music, and was hearing Mozart for the first time. Specifically, it was the world of touch that opened up to me, the feeling of air on my shoulders, the bristles of carpet under my feet, the varied textures of every chair and cushion. And it is still a mystery to me. It wasn’t like I’d never been barefoot before, but there was something about being entirely naked that made me acutely more aware. Of course, I was a teenager, and I’d be remiss not to mention arousal. But after the first hour or so, my brain figured intercourse wasn’t happening. There was also the thrill factor. When people say they climb mountains because they are afraid of heights, I understand what they mean, and I did flirt with the dark side of nudism – exhibitionism – at some point. But I never really cared for anyone to actually see me naked. All I really wanted was that sense of freedom, to be “one” with myself and my surroundings.

Over the next few years, whenever the family was away, the clothes came off. And I developed very good hearing. When a car door slammed shut, I had minutes to get dressed, and my shorts were always within reach. It was like having a fire drill, except it was a parents-arriving-unexpectedly drill, and anyway I couldn’t have had a fire drill because I was locked in my damn house.

Some days I worried I was suffering from some mental illness. My behavior wasn’t exactly “normal,” and the Internet was still years away, so I couldn’t just Google “being naked.” There was no way of knowing people like me existed. But that didn’t stop me from growing ever more bold. Places I secretly went naked: my dad’s orange grove, hotel locker rooms, hotel jacuzzis, and the woods behind our restaurant. That last part, I admit, was a little stupid. This wasn’t some idyllic, Middle Earth-type forest either; this was Florida swampland, more Naked and Afraid than anything else, with spiders, snakes, and a lake full of alligators. But none of that concerned me. There was also trash, from the homeless people who liked to camp out there, and maybe on-the-run pedophiles. Come to think of it, I was a pedophile’s ultimate fantasy: a boy in the woods, naked and alone. But my only real fear was someone stealing my clothes and having to return to my family, and a restaurant full of shocked customers and employees, without any explanation, wearing only a pizza box. Sure, it might have made for a good story, but I’d probably be suffering from embarrassment-PTSD now.

I’d finally decided I was a nudist. Though I couldn’t be sure what the lifestyle entailed, life just seemed better without clothes. Even algebra homework was more fun (or should I say bearable?) on my bare butt.

But my new-found freedom came coupled with anxiety. As a nudist, I was true to myself, and yet my true self had to remain hidden. Nudism was about being “open” yet also my biggest secret. Frustrated by these paradoxes and philosophically minded at a young age, I started to ask the difficult questions, like why shame existed to such a degree in our society, and why it was even necessary to wear clothes at all. Wouldn’t the world be better without? Sometimes, when my sister drove me to the library for school, I spent the whole time on the microfiche machine (Google it, kids!) looking up articles on nudism / naturism. But more than anything, I wanted to come “out of the closet,” to spend time around like-minded people so I could be myself and enjoy the elements of nature without fear. When boys my age started fantasizing about sex, I was thinking about the nude beaches of the Greek islands. But how could I ever manage to go there? How could I ever be free? I visited Greece every summer, but always with the family, and if my mother were to discover my nudism, with her clothing-related OCD, she’d likely die of a heart attack.

4 thoughts on “Least Likely to Become a Nudist: A Memoir: Part 3”