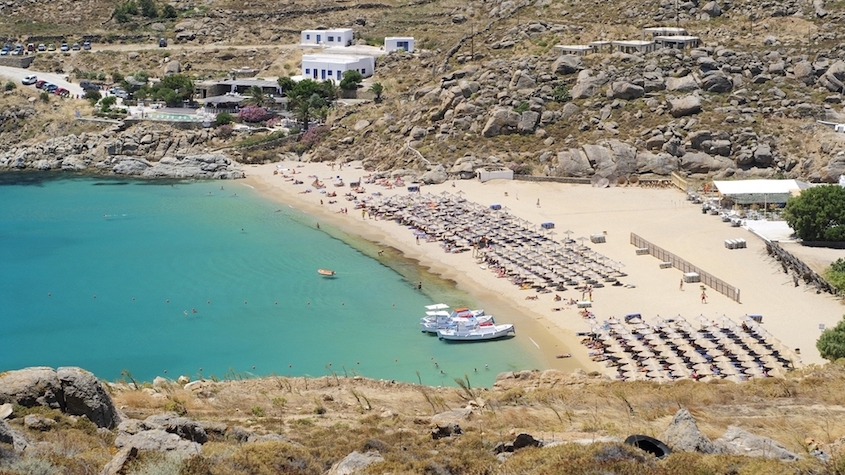 Mykonos is basically sex island, my Greek friend tells me. Once you get off the boat, a random girl will grab you and take you to bed. Sure, I say, rolling my eyes. I didn’t believe his promises for a minute, but I’d heard plenty of crazy stories about Mykonos. Yes, it was a place for hormone-fueled teens to get it on, but did that mean we were all going to get laid? I didn’t think so. I wasn’t exactly a “player,” just a shy, old-fashioned romantic, who wasn’t about to hook up with a stranger even if the opportunity presented itself. But I was still thrilled to check out the island because, as my friend’s father told me one night while he was drunk, when he was a teen, he was like “a Martian in my bathing suit.” Everybody there was naked. And that sounded like heaven to me!

In a lot of ways, Mykonos lived up to its reputation. Girls weren’t exactly waiting to jump from the alleyways to steal our virginities (well, not for free, anyway) but any guy with an ounce of game could probably have scored. I suppose my friends and I were losers, in the 80’s sense of the word, because we never did see any action. But the promise of sex was all around us. Twenty-somethings danced topless on bar tops downing shots like Spring Breakers from Girls Gone Wild, and I found it impossible to sleep because our crappy, cheap-ass hotel was infested with mosquitos, my friends snored, and the girl in the next room was enjoying herself entirely too much. Coming to Mykonos with no game and no partner was honestly depressing. But I didn’t care, because I had Paradise Beach to look forward to.

Problem was, my Greek friends weren’t into the nudist scene. All they wanted was to hit the clubs, get drunk, and grind against female tourists. This sucked for me, because I was anything but a club hound. I didn’t even partake of alcohol. No liquor, no wine, no beer, nada. Techno music also wasn’t my thing. Put me in a room full of a thousand gyrating people, with an infinitely looping backbeat so loud you can’t even hear yourself think, and I might as well be in Hell. I much preferred—deeply longed for—an isolated stretch of sand, where I could sit my naked-ass self on a reef with nothing to listen to but the gentle sounds of the tide and the seagulls.

Paradise Beach was fairly close to our stay, but the most skin on display were boobs, and as a kid growing up on the Greek isles, I’ve seen as many boobs as earlobes. But I wasn’t there to stare at people. I wanted to drop my pesky suit and free my balls to the wind as God intended. So I started asking around, “Where are all the naked people?” and the hotel bartender gave me the answer. “You have to go to Super Paradise,” he told me. Super Paradise? Really?

Super Paradise, as it turns out, is a real beach, but also a real bitch to get to. Going by foot involved some risky, Indiana-Jones style adventuring. I had to hike uphill, through thorny bushes, then step over a narrow ledge overlooking a deadly drop. I did this a few times before learning about the small boat that left in the morning for all the hidden beaches. My friends sat in that boat for the hour-long trip with a look of sheer terror. I could not understand the panic, until we arrived, and they let out a sigh of relief. Much to my dismay, bathing suits were not some otherworldly thing on this beach, as my friend’s father had told me, and since quite a few tourists were wearing them, my buddies didn’t have to worry about being pressured to go without, even though I couldn’t imagine wanting otherwise. I mean, you’re forced into clothes every day of your life, everywhere, all the time, 24/7, and now finally—finally—you get a chance to be free. How could you not take it? I suppose they’d been trained, like most of us, to feel ashamed of their bodies. I was also annoyed because the nudist-curious were being pushed from beaches made famous for nudity. Women on the fence about letting it all hang were getting scared off by gawkers in their neon-green, knee-length trunks. The way I saw it, textiles were an invasive species, polluting this pristine, natural habitat, with their shame culture and Nike sportswear. Still, a flock of freedom-loving spirits gathered at the far end of the beach. We found brazen singles of either sex, daring couples, and even a few families, and my two textile friends and I planted ourselves right smack in the middle. I threw off my bathing suit without a second’s hesitation and they sat there in their sopping wet outfits looking awkward and miserable. I assume they didn’t want me or anyone else seeing their peens, even as mine and a few dozen others’ bobbed freely in sight of God and all Creation. I even took pictures (I know, this was a big no-no and I shouldn’t have done it!) but the naked girl lying next to us just smiled and waved. This was long before cell phone cameras and digital photography, mind you, so my friend freaked out, wanting to know how he was going to get the film developed because, God forbid, some stranger working in a darkroom in Athens would be seeing his best friend’s dangly bits.

The last night of our trip, my friends were determined to party like it was 1999. So we hit the clubs and I tagged along, thinking to myself, “OK … all I have to do is survive until 5:00 am.” Yes, you read that correctly. The clubs in Mykonos closed at 5-FRICKIN AM . . . as in, FIVE-IN-THE-MORNING, as in, one hour before sunrise. OK. Whatever. I was young and figured I could do this. Now, I cannot tell you how many times I had to listen to, “I need your lovin’ like the sunshine” or the other musical masterpiece, “you gotta lick-it before we kick-it,” but let’s just say those songs are burned into my brain like cuneiform lettering on a clay tablet. If I ever get Alzheimer’s disease, I’m more likely to forget my own name before I forget that I have to lick it before I can kick it. So I waited, and waited, and waited and . . . waited . . . and when 5 am rolled around, guess what happened? Did we finally, finally go back to our hotel to get some much needed sleep? No! Because one of my friends learned about a club that was open until EVEN LATER! I am not kidding. We left a club at 5 in the morning to visit YET another club.

Screw this, I thought, I am going back to the hotel on my own because, as I told my buds, I wanted to wake up early to hit the nude beach again. The beach? No way, we aren’t going to the beach again, they argued. We have to take the ferry boat back to Athens by noon. But that wasn’t going to deter me. I had come to Mykonos for the nude beach and they had come to party, so we went our separate ways. I set off for a few hours’ shut-eye and they stayed behind to listen to “I need your lovin’ like the sunshine” for the 200,000th time.

The walk back to the hotel was miserable. My neck and shoulders were sunburnt, my body was covered with mosquito bites, and I had a painful lesion on my left foot from my sandal. I also felt bummed to be leaving my friends. And HERE is where the story gets weird. As I am limping along, a drunk guy comes out of nowhere, puts his arm around me, and starts singing, “Clouds never laughed before, and beanstalks never grew, ponies never ran before, till I met you . . .” WTF, was going on? Apparently, he was singing this absurd song from the 90’s film The Brady Bunch Movie, which we had both watched on the plane coming to Greece, and he somehow remembered me from the cabin. It was such a weird coincidence and such a dumb song, that all I could do is laugh and try to sing along with him.

My friends were ADAMANT that I arrive by nine that morning so we not miss the boat, and they set their alarms to the dot, which I thought was unnecessary, because the port was like a half-hour away. When I arrived at Paradise, the beach was empty, with everyone hungover from the night before, but I preferred it that way. I found my quiet place, my solitude on the sand, and became one with nature again. With the sun low on the horizon, the water was freezing, but those exhilarating moments of freedom were well worth it. I got back to the hotel around ten to find my pals in a coma (clubbing all night will do that to you), but thanks to me and my weird-obsession with getting my kit off, we caught the ferry on time.

Looking back more than twenty-years later, I realize that coming out of teenage-hood and into adulthood is the most freedom you’re ever likely to know. Without parents or mortgages or a career or a family to provide for, you can carpe diem with little care. Most young people embrace these freedoms when they can, but abhor the idea of getting naked with friends, despite the fact that you’re probably never going to look or feel as good when you’re an old fart. Nudism seems to appeal almost exclusively to people on social security, who, I do not doubt, can only dream of having the body they once did. I suppose I could have also experimented with drugs, alcohol, and sex—but those things come with risk—risks none of my friends concerned themselves with. Drunk driving? STDs? Unwanted pregnancies? Nobody I knew worried about it. Just embarrassment. All that mattered to them and everyone else in the 80s and 90s was dick size. I need a magnifying glass to find mine and really couldn’t care less, because I prefer looking like David and being able to sprint down the beach without flapping. And I count myself lucky, in knowing better, in having found the confidence to bare myself and be myself, long before the retirement checks come in.